TaylorMade has been one of the most consistent manufacturers of metal drivers since they launched the Burner back in the early 1980s, and it’s 40 years since Ron Streck gave the brand their first victory at the 1981 Houston Open. Over the past four decades we have seen TaylorMade bring out some game changing advancements in driver technology, especially moveable head weighting. Their 2021 SIM2 head has dropped that feature – but has it affected performance?

To see how TaylorMade have evolved we put their lastest SIM2 driver up against the 2007 TaylorMade Burner and the 2019 M6. The Burner was simple and not caught up in the moveable weight technology found in their R series range. You had three lofts and the choice of a regular or stiff shaft.

The TaylorMade M6 was packed full of technology: Speed injected face, where they produce a face that’s beyond the R&A and USGA speed limits and dialled it back to the maximum tolerance by injecting the face to make sure each driver is right on the legal limit. It was also the model to receive the aerodynamic sole called the Inertia Generator.

Read beyond the marketing blurb!

You’ve got to love their marketing team for coming up with these names. Plus the Twist Face technology, which is designed to iron out wayward strikes from the heel and toe. So, why haven’t I selected a club packed with moveable weight technology, as TaylorMade has made this a key selling point since they brought out the R7 quad in 2004? It’s due to the fact that the new SIM2 drivers have a fixed weight system – and they have removed the sliding weight feature.

What is the difference between the SIM2 and the SIM2 Max?

Simply put… not that much! But the changes are subtle. They look, at first glace, to be identical which is very confusing. Thankfully one has MAX written on the sole, which helps. The stock shafts differ with the SIM2 MAX offered in the Fujikura Ventus Blue and the Kuro Kage Silver, while the regular SIM2 comes with the Tensei Raw Blue or the Project X HZRDUS Smoke RDX.

Both heads are 460cc but it’s the weighting that changes the characterising of the clubs. The SIM2 Max delivers high MOI with a heavy 24g tungsten weight positioned on the Inertia Generator. The TPS Front Weight is strategically located on the sole of the club to boost forgiveness and launch.

The SIM2 has a slightly lighter 16g steel weight positioned on the Inertia Generator and the front weight is strategically located to encourage optimal launch with low spin compared the MAX head.
The SIM2 is aimed at the slightly better golfer that is trying to balance that new found issue of increased ball speed and elevated spin rates.

First up was the 2007 Burner. A classic shaped head that does look a little dated against the modern heads. With a 9.5 degree head and a stock 50g TaylorMade shaft it was impossible to adjust anything. Which took me back to the days of changing shafts with a blow torch on the work bench, trying to make sure I didn’t melt the hosel. The swing speed was there and feel was solid, but nudging close to 107mph I was never going to get the spin under control.

The M6 with its carbon crown is a great looking club. I wasn’t a great fan of the Inertia Generator on the sole but thankfully at address you can’t see it. Fitted with a Fujikura Atmos 6S shaft and set to 9 degrees I was still managing the same swing speed as the Burner, but the ball speed was on average 9mph higher. Which lead me to believe the Inertia Generator wasn’t really adding much in terms of club head speed. The main benefit was coming from the Speed Pocket and the Speed Injected face.

Considering I couldn’t get my speed above 107mph I was impressed with the results from 10 shots with both the SIM2 and the SIM2 MAX. The SIM2 spun the ball 400rpm less than the MAX, which equated to a further 10 yards on average, in terms of total distance. The furthest I hit the SIM2 was 294 yards and the shortest was 281. Considering the worst strike came out of the heel the lack of yardage drop off was impressive. 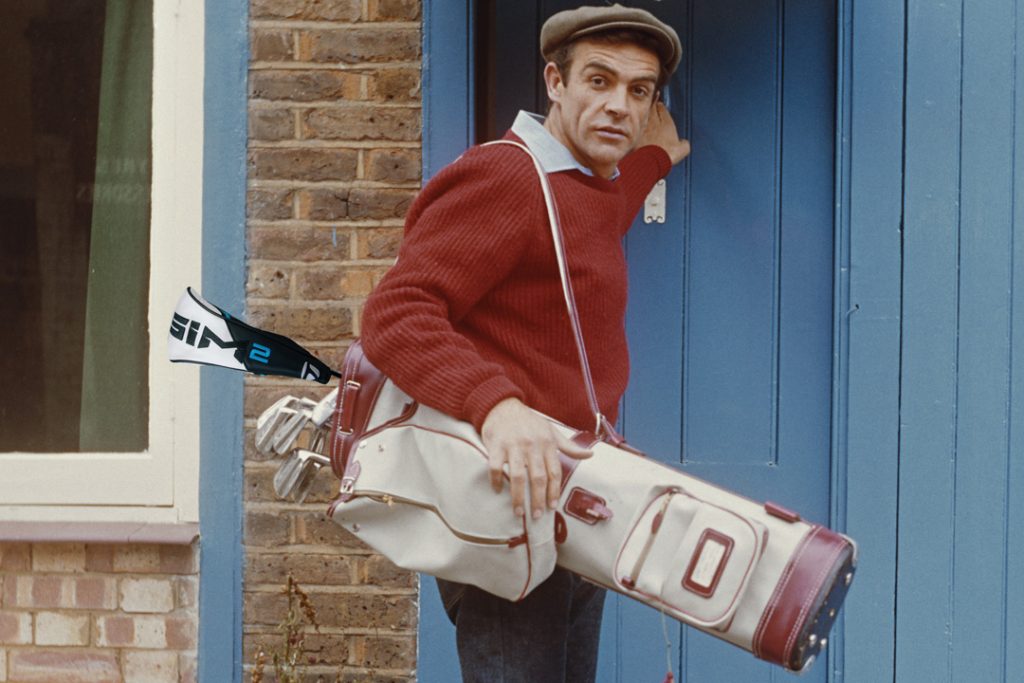 James Bond would be delighted!

Don’t let the removal of the movable weigh technology make you believe these are stripped down in terms of technology. They both house more goodies than James Bond on a back-packing holiday:

Building on the breakthrough performance of Shape In Motion, SIM2 features an all-new Inertia Generator formed by its 9-layer carbon sole. The lightweight panel is strategically angled to improve aerodynamics at the most critical phase of the swing for faster clubhead speeds.

Forged Ring Construction is the key to unlocking a new dimension of distance and optimal forgiveness with SIM2. Crafted from a lightweight and high strength aluminum that’s precision milled, it unites the critical components of the driver head into a singular force. Forming a driver built for forgiveness and power, designed to give you the confidence to take on any tee shot.

THE FACE OF SPEED & CONSISTENCY

The milled back face cup works in unison with a new toe-side Speed Injection Port to push ball speeds to the threshold of the maximum legal limit. The iconic Speed Pocket protects performance on shots struck low on the face, while Twist Face continues to help golfers find more fairways.

We journeyed beyond tradition to bring you power, speed and forgiveness in a low spin driver. The reconstructed SIM2 delivers high MOI with a heavy 16g steel weight positioned on the Inertia Generator. The TPS Front Weight is strategically located to encourage optimal launch with low spin properties.

This year I like the fact TaylorMade have kept things simple – but perhaps it’s too simple. It’s very hard to tell the difference between the two models and the vibrant colours are attractive but this might date the club quickly. The crown is also too fussy. I understand the reason for a painted top line to give the impression of more loft to build confidence at address and also assist with face alignment, but the painted edges just give me too much to focus on. I would have preferred a clutter-free carbon crown with a subtle ball aligner. You can keep the sole busy and bright as you cant see it at address.

Club speed was a shock!

I’m not overly impressed with the Inertia Generator but all the other elements certainly work. The face is the engine room and it pairs so well with the other features such as the Speed Pocket; Forged Ring and Split Mass Weighting. The swing speed to ball speed ratio has to be one of the best. To hit a 294 yard drive with a swing speed of 107mph was astonishing when you factor in a spin rate close to 2,500 rpm. It was the poor strikes where this club was a pleasant surprise as I got out of jail a few times with what could only be described as shocking swings. So it doesn’t matter if you have a low or high swing speed, the SIM2 heads with help optimise your drives. It’s priced competitively and the quality isn’t quite as a high as some other drivers on the market right now. If there's one thing the PGA Tour has done since the New Year, it's keep us entertained. Remarkable storylines have...