The scorching UAE summer is nearing its end which can only mean one thing, the hotly anticipated return of the popular DHL Swing Against Cancer Golf Series in the shape of the DSA Open which takes place on Emirates Golf Club’s iconic Majlis course on September 19 with none other than former Ballon d’Or winner Ruud Gullit lined up as the star attraction.

Last year’s event, featuring former Man Utd, Leeds and England footballer Lee Sharpe, saw a full field of 120 golfers take to the Majlis for an unforgettable day of golfing action before ‘Sharpie’ regaled 190 dinner guests with hilarious tales from his days playing for Sir Alex Ferguson’s all-conquering side of the 1990s when he was treated to the legendary manager’s ‘hairdryer’ treatment on more than one occasion. The event raised a whopping US$30,000 for charity partner Friends of Cancer Patients which went directly to the treatment of four-year-old local resident Mohamed Sameer Abdullah who was diagnosed with leukaemia.

Event organisers Worldwide Golf and Sixteen10 are aiming to raise more vital funds this year to help 13-year-old Randolph Palomar, who is recovering from a brain tumour, after announcing the former Chelsea, Milan and Holland superstar as the headline act at this month’s event. Gullit, who is a keen golfer and single figure handicapper, will join in the on course action during the day while guests at the evening event will be treated to a delicious BBQ inclusive of two hours of free flow house beverages where the two-time World Soccer Player of the Year will speak about his playing days alongside the likes of Marco Van Basten and Frank Rijkaard. “When I was asked to be part of this fantastic initiative I jumped at the opportunity,” said Gullit, who won the 1988 UEFA European Football Championship with the Netherlands and is a regular competitor in Pro-Ams around the world such as the Alfred Dunhill Links Championship. 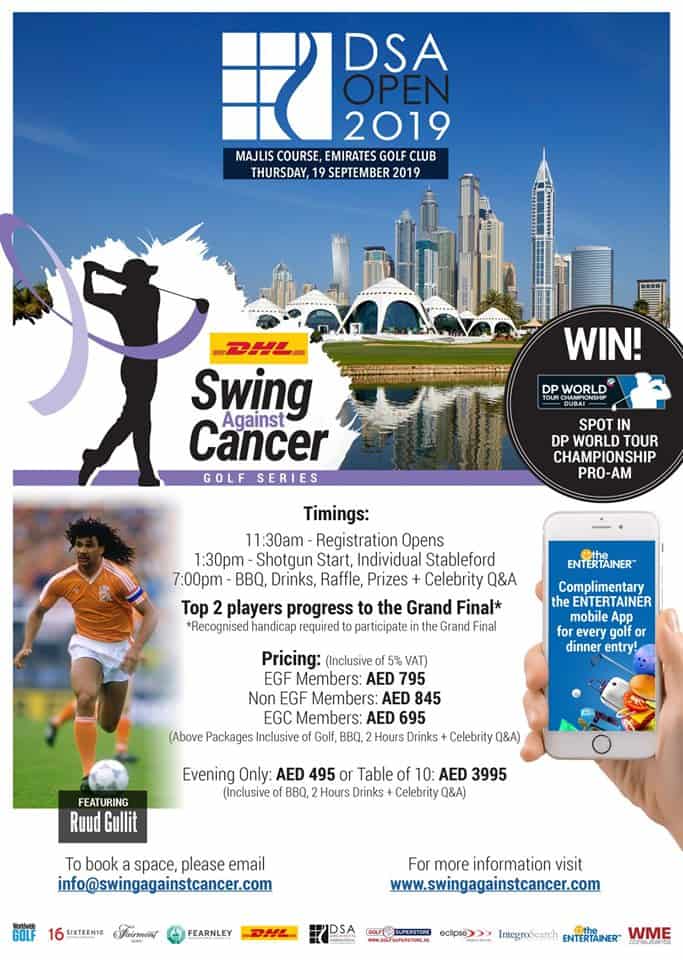 somewhere along the line so to be part of the great work that Worldwide Golf and Sixteen10 are doing is an honour and I hope we can raise as much money as possible on what promises to be a fantastic day for all. The Majlis is one of the world’s most iconic golf courses and I’ve enjoyed watching the Dubai Desert Classic over the years so I can’t wait to join the competitors in the DSA Open. The evening should be a lot of fun too and I’m looking forward to meeting all the guys that come out to support the fight against cancer.” – Ruud Gullit

The DSA Open champion will qualify for the DHL Swing Against Cancer Golf Series Grand Final, the Mike Clark Golf Day, which takes place on the Fire course at Jumeirah Golf Estates on November 7 where a place in the Pro-Am at the star-studded DP World Tour Championship will be up for grabs. Those taking part in the DSA Open will be kitted out in brand name shirts supplied by local retailer Golf Superstore, which recently opened its brand new store in Dubai’s Al Quoz, while a host of on-course side contests will give everyone a chance of walking away with a prize.

MOBILE APP FOR ALL GUESTS

The ENTERTAINER 2-4-1Mobile App will be given out to guests attending the golf day or evening only while a host of great items will be up for grabs in the live and silent auctions. A raffle full of sporting memorabilia, hotel stays and free brunches will be held while the series’ favourite game, ‘What Happened Next?’ is sure to be a big hit with guests once again. Further support for the event comes from DHL, Fearnley International Group, Eclipse Staging Services, Integro Search, The Visiting Tailor, Tenable Fire Consultancy, Fairmont Dubai and WME Consultants.

Steve Kelshaw, Managing Director of title sponsors, DSA Architects, is elated with the return of the event which was first hosted in 2017 when Liverpool FC legend Gary McAllister was the guest of honour.“We are delighted to be able to put our energy and support behind the Swing against Cancer series again this year”, said Kelshaw, an avid golfer who plays off scratch. “To have Ruud Gullit, the 1987 Ballon d’Or winner with us for the day is amazing and really highlights that giving back is realised at the very highest level. Our partners, colleagues and friends have again put their heart and sole into the day, contributing to ensure that we raise the bar, making the day special for all involved.”

The DSA Open is the penultimate event on the DHL Swing Against Cancer Golf Series’ schedule following the successful season-opening DHL Open and the Fearnley International Open in Scotland, which was the first event to be held outside of the UAE. The two events raised over US$50,000 with the help of former Liverpool FC legend John Barnes at both days while Dean Holdsworth lent his support at Dubai Creek Golf & Yacht Club for the DHL Open. The DHL Swing Against Cancer Golf Series has now raised over US$250,000 since it launched in 2017 and has captured the imagination of the UAE’s golf and business communities as well as gaining support from a string celebrities from the worlds of sport and entertainment including Harry Redknapp, Mike Tindall, Michael Campbell, Teddy Sheringham, Robbie Fowler, Matt Le Tissier, Ian Bell and Brian McFadden. What defines a golf coach as legendary is precisely the same thing that defines the players – Major titles. The...