Louis Oosthuizen, widely regarded as having one of the best golf swings in the game, moves the club with such ease it’s no surprise that he’s the envy of many. Let’s take a closer look at how he does it. 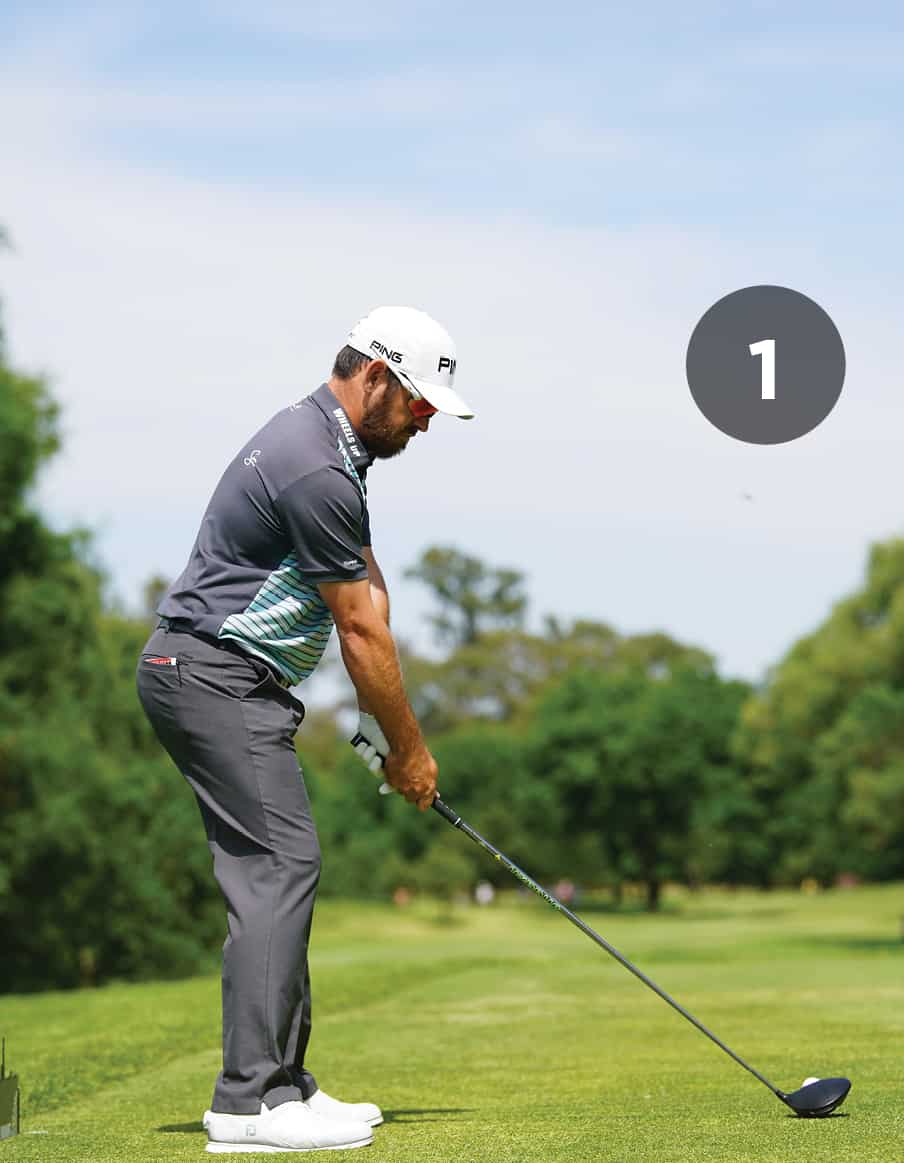 1) As you can see Louis has a beautiful setup, he’s got a little ﬂex in his knees which has engaged the quads, the weight is nice and centered on the balls of his feet, his arms are hanging down nice and relaxed and the big thing I want you to notice is how his shoulders have very little tension in them. This is a man who is very comfortable over the ball.

2) Here you can see Louis has initiated the take away using his core. He hasn’t snatched the club away and the hands are working closer to the right thigh rather than away from it. 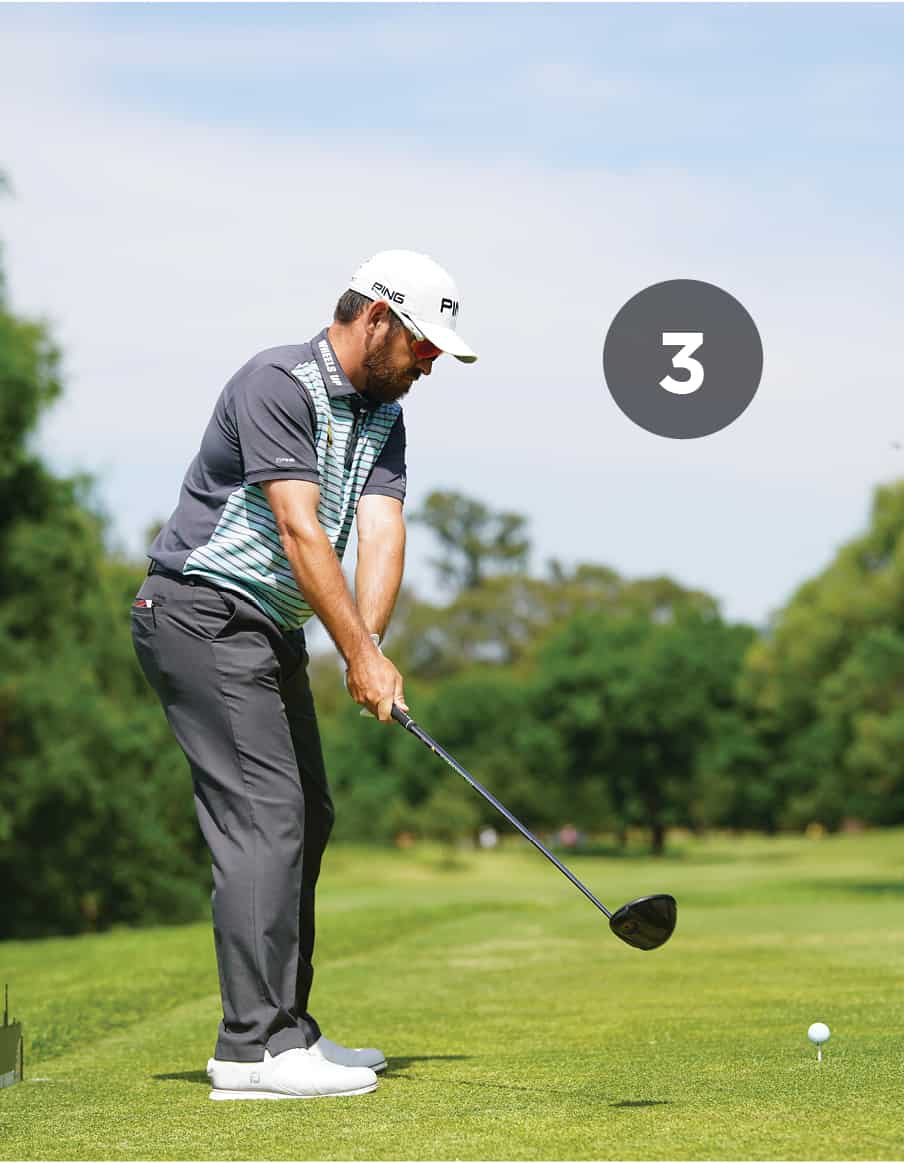 3) In this image, you can see how the gap between the butt end of the club and the body/thigh has narrowed from where it started at address. You will also notice how the clubhead is clearly outside the hands and what I love is how his left arm is working in unison with his chest and that there is very little daylight between the left forearm and chest. 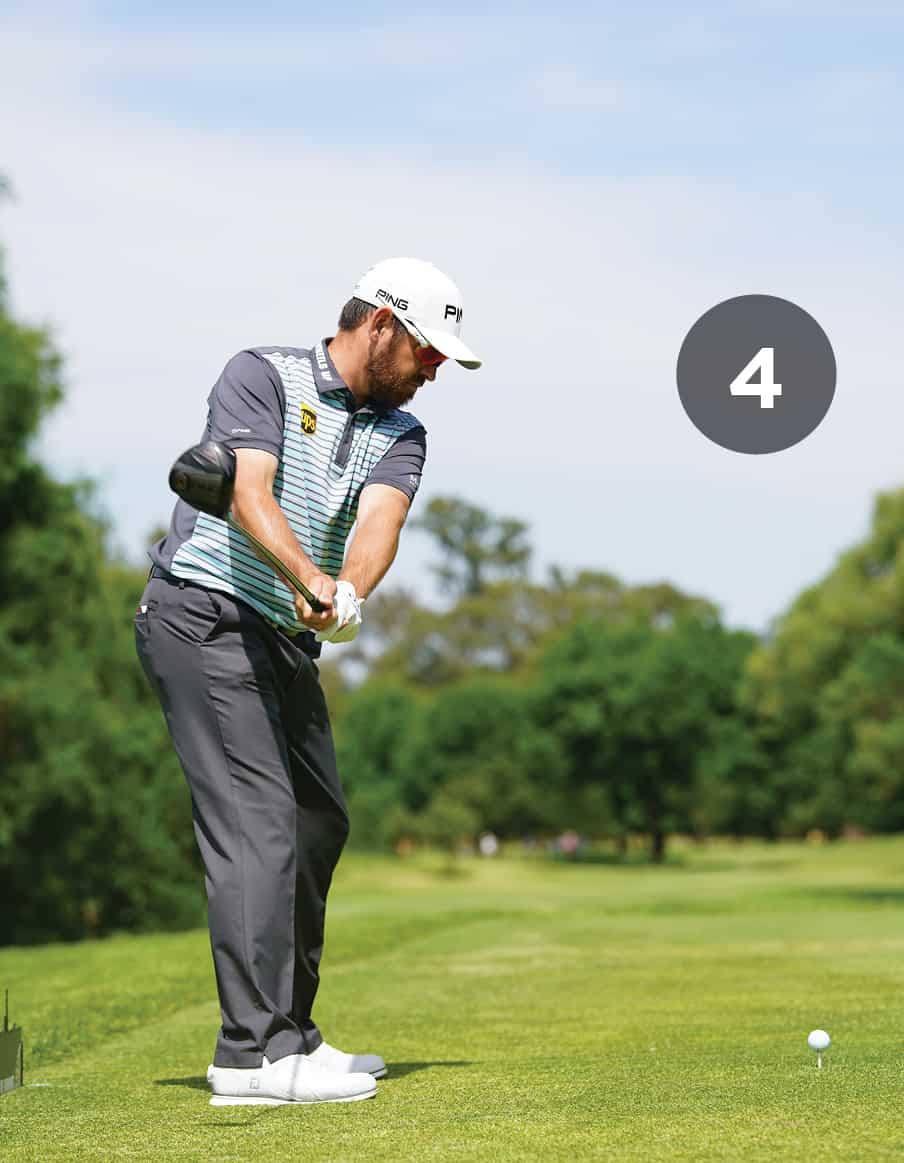 4) Here you can see the club shaft is parallel to his toe line, the left arm is nice and straight thus maintaining the width in his swing, the right wrist is hinging nicely and the right arm is bending at the elbow. The clubhead is matching up nicely with the hands and the toe of the clubhead is pointing upwards nicely, indicating a square clubface and good left forearm rotation. Oosthuizen is on plane. 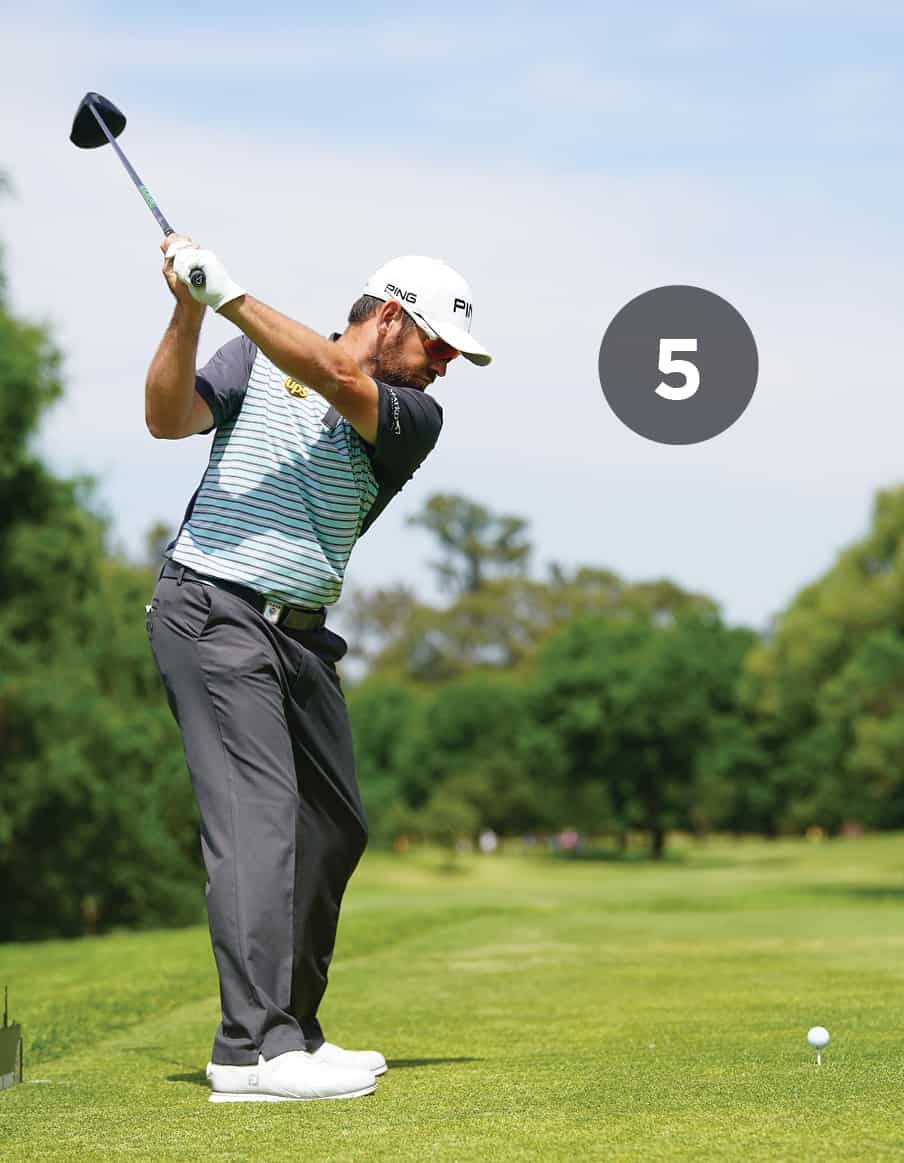 5) In this image, we see Louis is moving nicely onto his right side, indicating good weight transfer. The left arm is effectively across his chest and notice how both the left arm and shoulder plane match. The wrists have hinged fully, the right arm has folded perfectly and all that needs to be done from here is to complete his pivot. 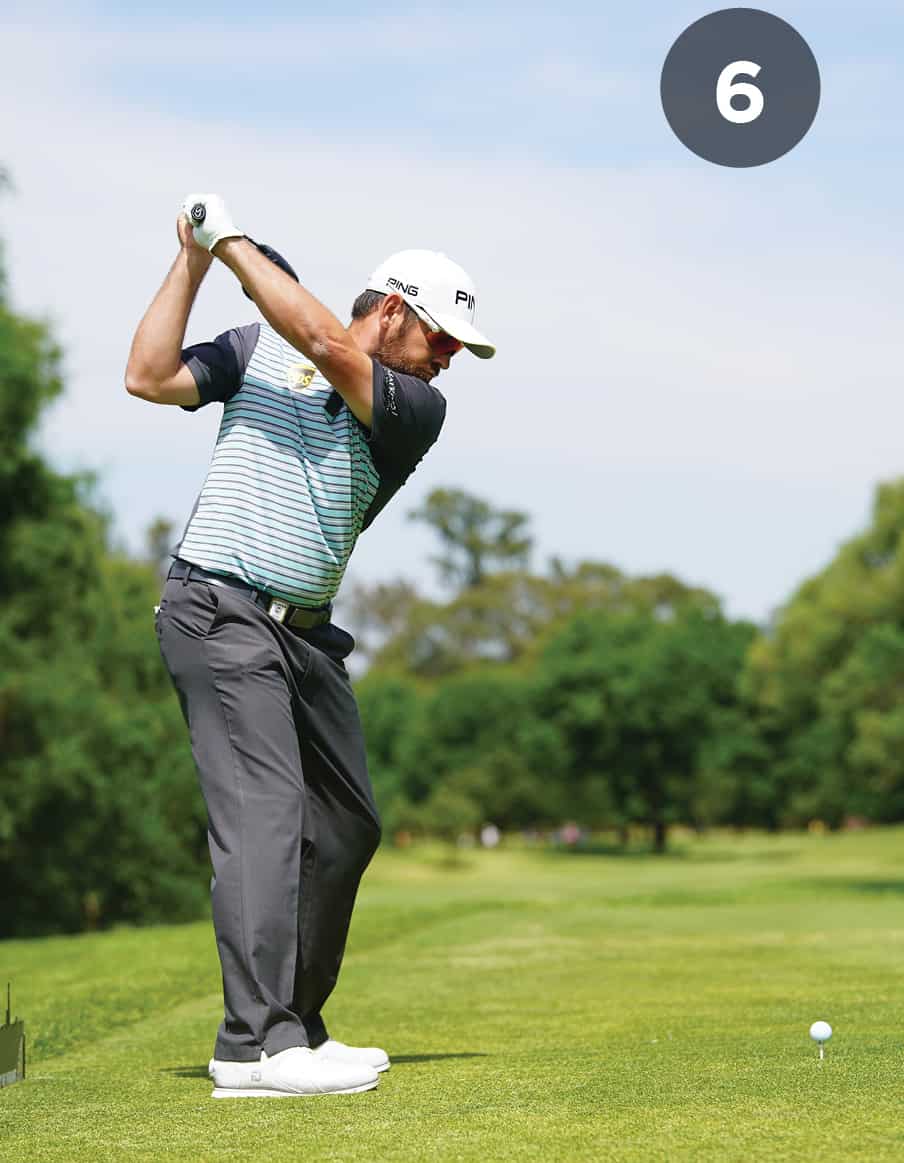 6) This is picture-perfect. Louis has wound up beautifully, his back is to the target, left arm nice and straight, hands are above the right shoulder, his left wrist and clubface are mirroring each other and the clubface sits in the neutral position. From here he can hit whatever shot he wants. His hips have a nice tilt and are wound up about 45 degrees to his shoulders which are 90. This offers him the right amount of resistance for his upper body to work against. He is coiled like a spring ready to go. 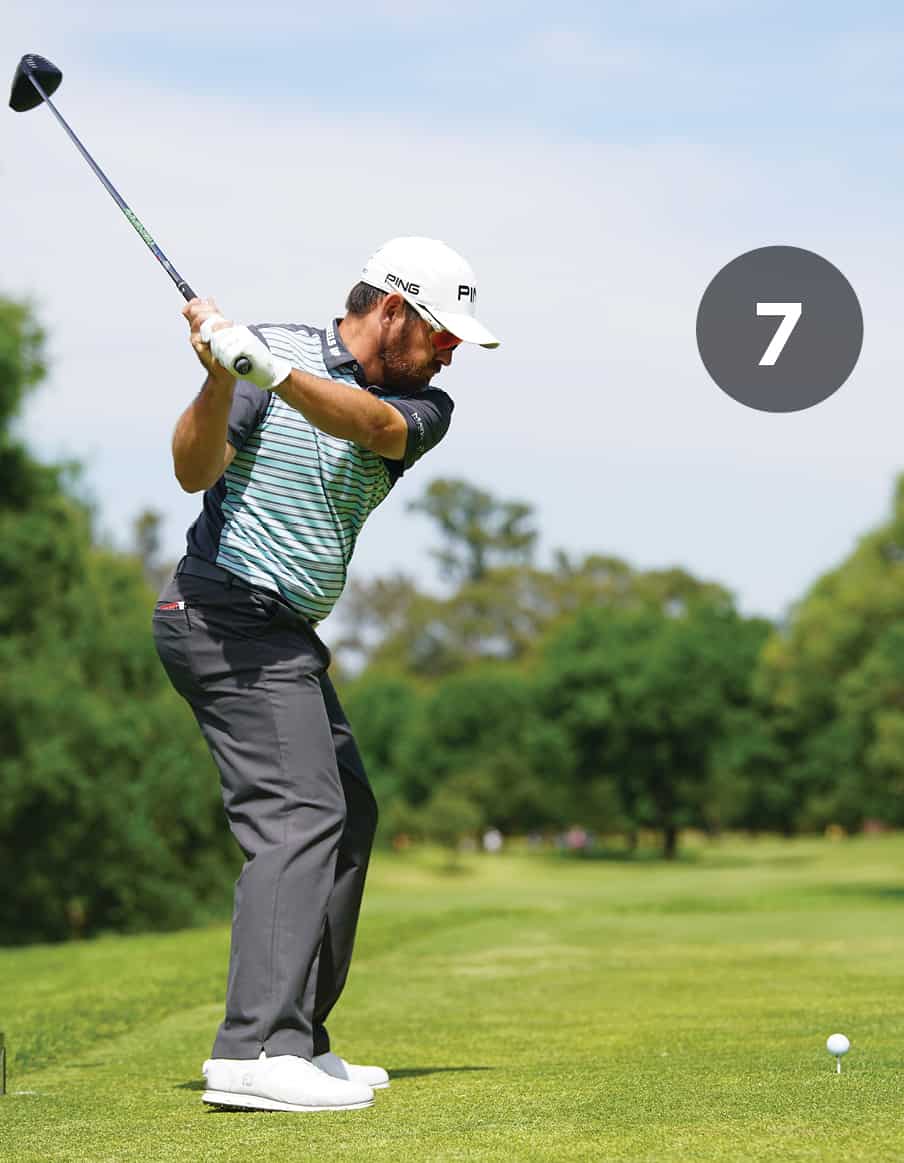 7) In this image Louis has transitioned into the downswing. His legs have initiated the move and what you can notice is that while his back is still somewhat to the target, his legs and hips have started to unwind. This is a move that’s loaded in power. Finally just pay attention to Louis’ chin. Notice how the left shoulder and chin are touching, in the following frames you’ll see how they separate from each other which will help him get the extension with his arms post impact. 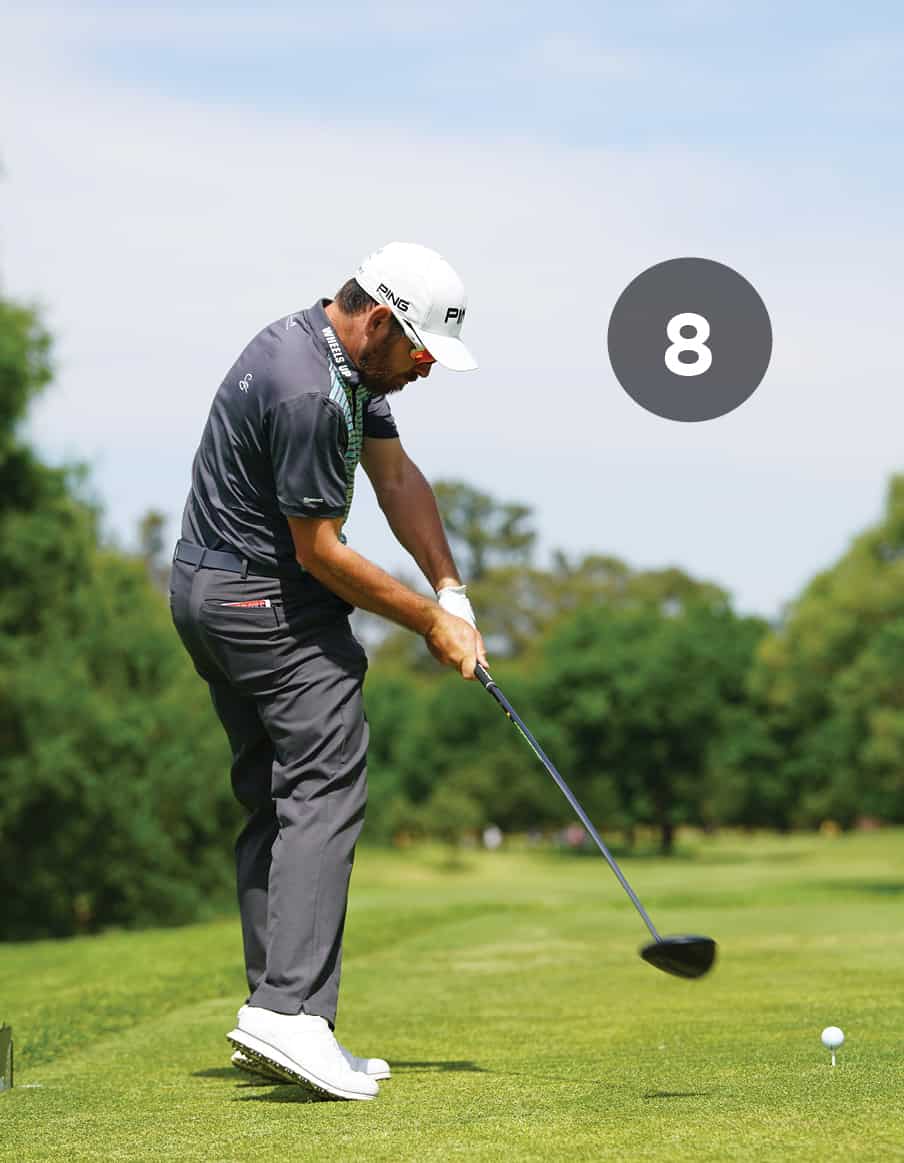 8) Look at how Louis is approaching impact. His right elbow adjacent to his right hip, the clubhead is tracking a similar path to the one it went back on and thus he’s on plane, but look at where his hips are (belt buckle almost pointing to the target), in relation to his shoulders (buttons on his shirt are pointed to the ball). That hip and shoulder differential is what’s going to give him that snap at impact. Finally notice his head and how his left shoulder has come away from his chin. In the next frame you’ll see how this move allows him to get his arms nice and extended through impact. 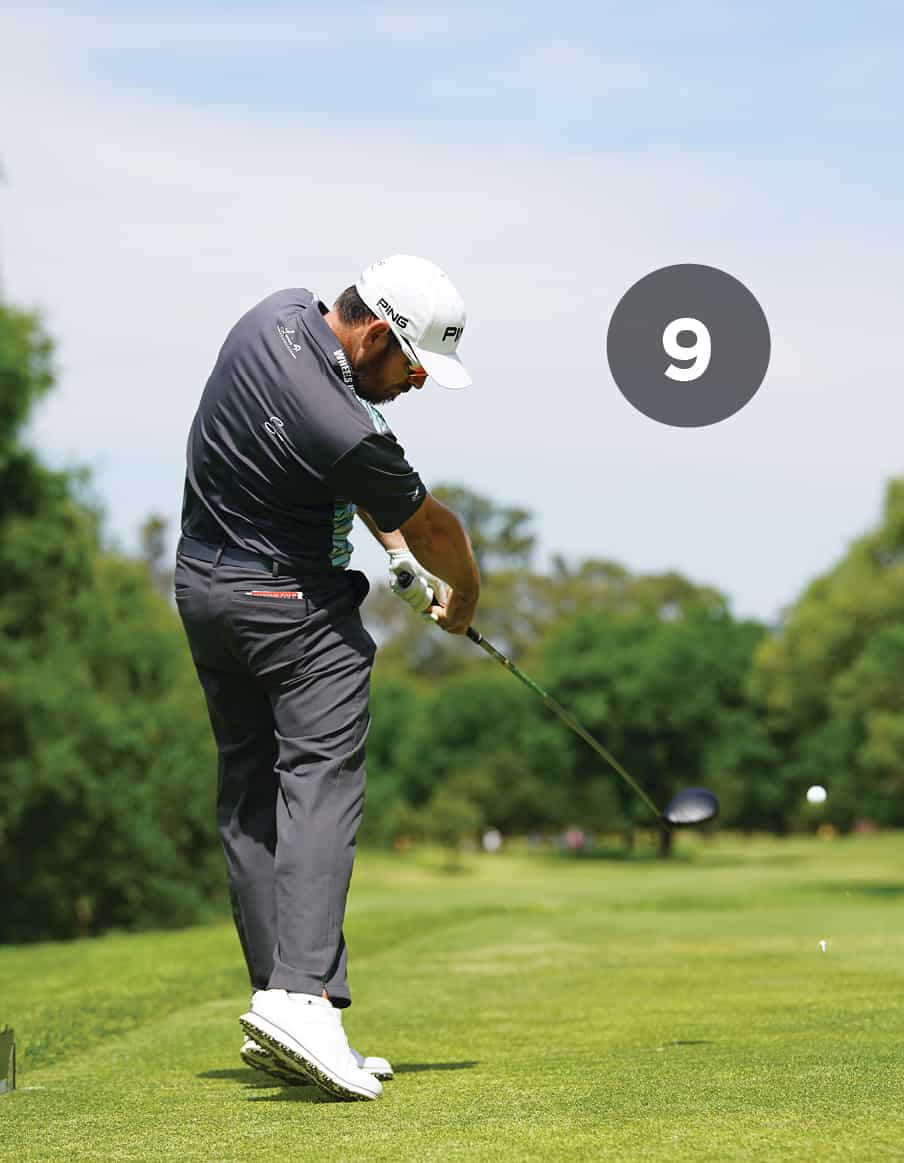 9) Boom! His hips have thrust and his feet are really pushing off the ground, the left leg is posting up and offers some much-needed resistance which he can work against. If we were to look at Louis in the same position, but from a face on angle, you would really notice how much the left side of his body would be stretching upwards at this point. Finally, just look at his arms and the extension going through the ball, amazing! 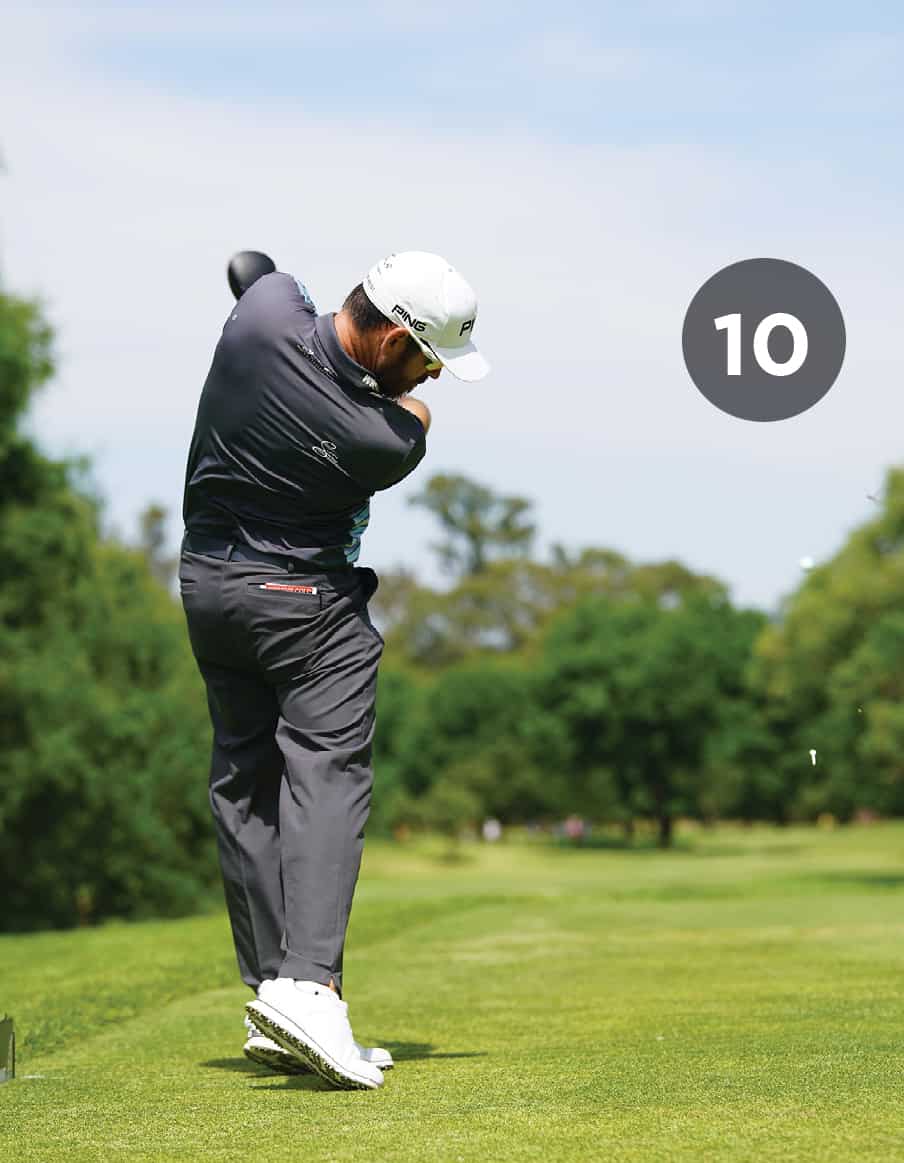 10) Here we can see the Louis has let rip and the ball is well on its way, his right shoulder is lower than the left and down toward the point where the ball was, hence he’s maintained his angles in posture very well. You will also notice his hips and shoulders match up indicating that his shoulders were unwinding at a much quicker rate once he was half way down. This match-up is only momentary as Louis is not done and from this point his shoulders will out-race his hips to the ﬁnish. Finally, his head has maintained pretty much the same position throughout the swing but will now begin to swivel to allow his eyes to look ’under’ the shot. 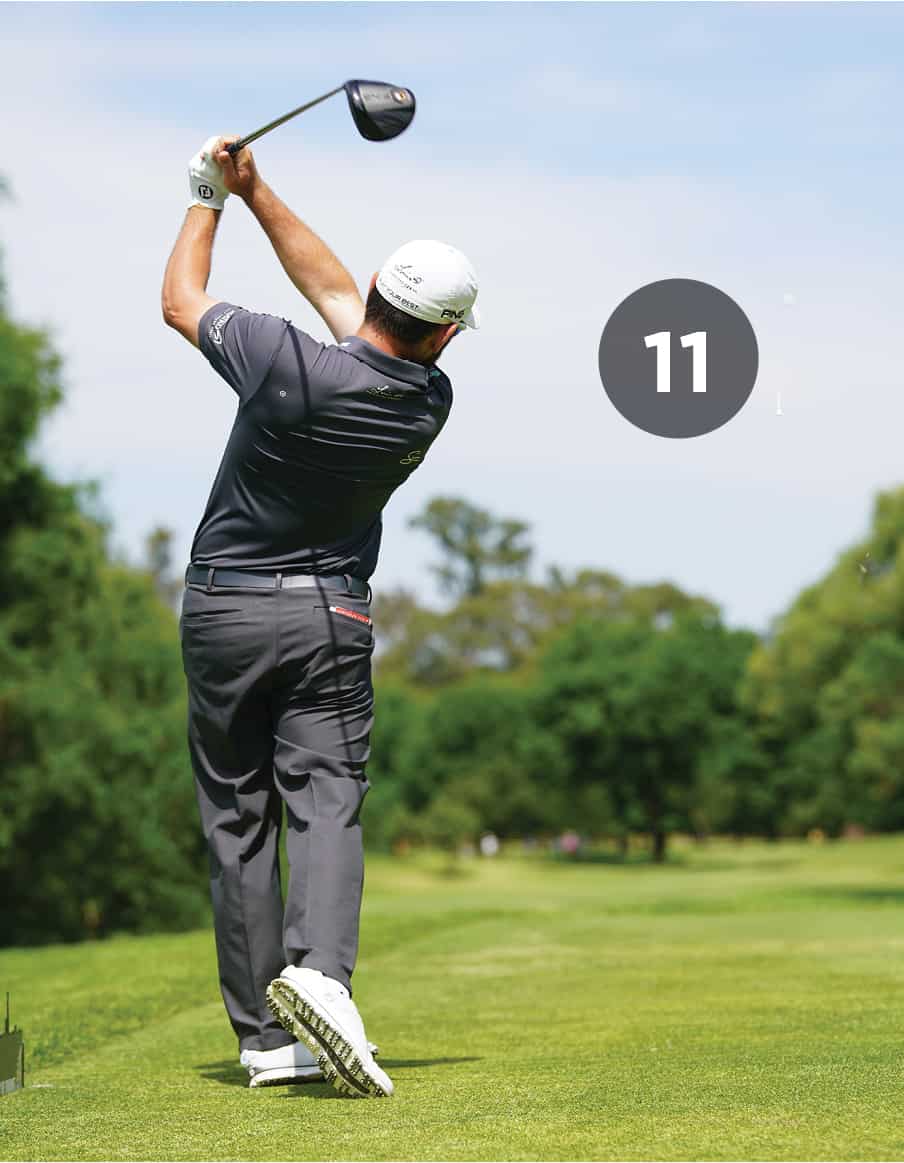 11) This is a classic look, the hands are nice and high, the feet are working nicely to the ﬁnish and look at how the right foot is rolling onto its big toe. You will also notice that his head is starting to come up from the position it’s been maintaining. This helps alleviate any pressure and stress on the lower part of the back and spine. This image and Image # 5 almost mirror each other. 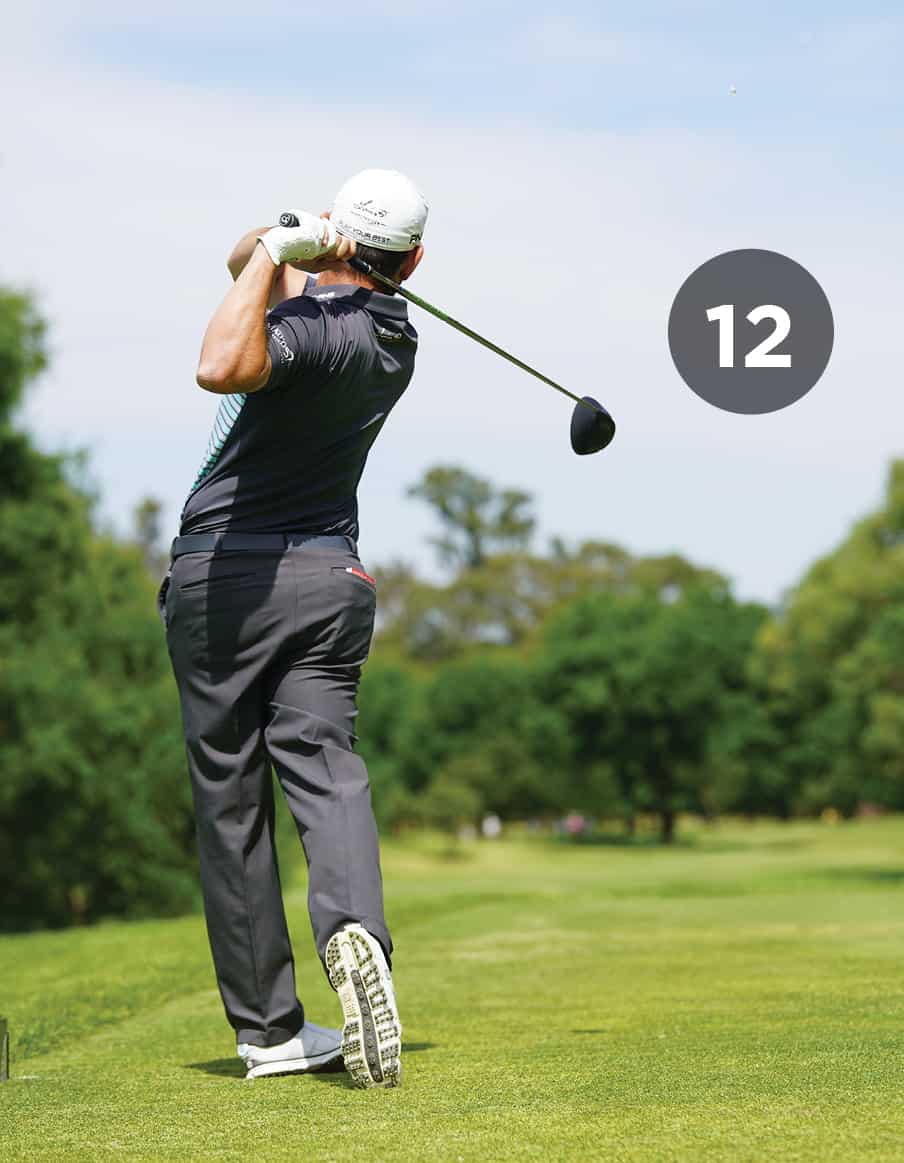 12) You’d be hard pressed to ﬁnd a better ﬁnish to a swing than this. His feet have transferred the weight back and through perfectly, the right foot is on its toes with the sole visible and the left is now supporting the majority of his weight (toward the left heel). His hips have unwound fully and as such the buckle on his belt would be pointed a touch left of his target. The shoulders and chest have come right the way through with the right shoulder now closer to the target than the left. Hands are behind the head and the shaft angles ever so slightly diagonally downward from left to right. His eyes are following the ball ﬂight like a hawk and all while holding everything in perfect balance.

This is such a great swing to imitate. It has: power, balance, ﬂuidity and oozes class. Be sure to take time and watch videos of it to really appreciate it in full ﬂow. While Chris Trott was beginning his career in golf as an assistant professional at The Belfry in the heart of...