It’s been quite a year for the women’s game in the UAE. The all-girls group Chicks With Sticks has gone from strength to strength, Olivia Jackson became the first female to compete in the Dubai Golf Trophy while clubs across the country celebrateD Women’s Golf Day on June 7.

With women’s golf rightly in the spotlight, we caught up with rising Filipino sensation Jamie Camero, who was recently crowned Emirates Golf Federation’s Ladies Gross Order of Merit champion, to find out more about her blossoming game.

Described as the ‘Pocket Rocket’ for her almighty distance off the tee despite her short stature, the 16-year-old +1 handicapper has taken the game in her stride since picking up clubs the age of seven with an impressive roll of honour that includes a host of Ladies Open triumphs as well as three World Amateur Golf Ranking titles in the last year.

Camero on being introduced to the game

My grandfather was an avid golfer and he introduced the game to my father, who then took me an open day at Sharjah Golf & Shooting Club when I was seven. I started playing a lot with my dad for fun and then moved onto tournament golf when I was around nine, that’s when I started taking the game more seriously. I got a handicap, started playing handicap tournaments. From there I got involved with the EGF Junior Opens, where I was able to compete against juniors who were at a higher level than me so that motivated me to take my game to the next level. I love how hard the sport is, you can hit hundreds of bad shots but then you hit that one sweet one and it compels you to play another one. When I first started I got a lot of praise for my swing but it was just me feeling a good shot that got me really into the game.

Camero on realising she had talent

I’d say probably around three years ago when I started winning tournaments consecutively, but it was mostly my parents who praised me and told me how good I was. I think I seem a better golfer to them than I actually am! But it’s because of them that I’ve got my handicap to where it is thanks to their motivation and praise when I play well. My dad used to play sports at a high level so he knows talent is something that you aren’t given, it’s something you have to get yourself.

Camero on her coach Joe Marshall

When I first started playing golf Joe Marshall was my coach at Sharjah Golf & Shooting Club and then he moved to Al Badia and then Montgomerie so I kind of followed him. Now he’s down at the Els Club and I’ve been a member there for a couple of years so it’s worked out nicely. He’s seen my very first swing and my most recent swing, he’s been on this whole journey with me. He’s been a great support to me, helping me raise my game to another level. 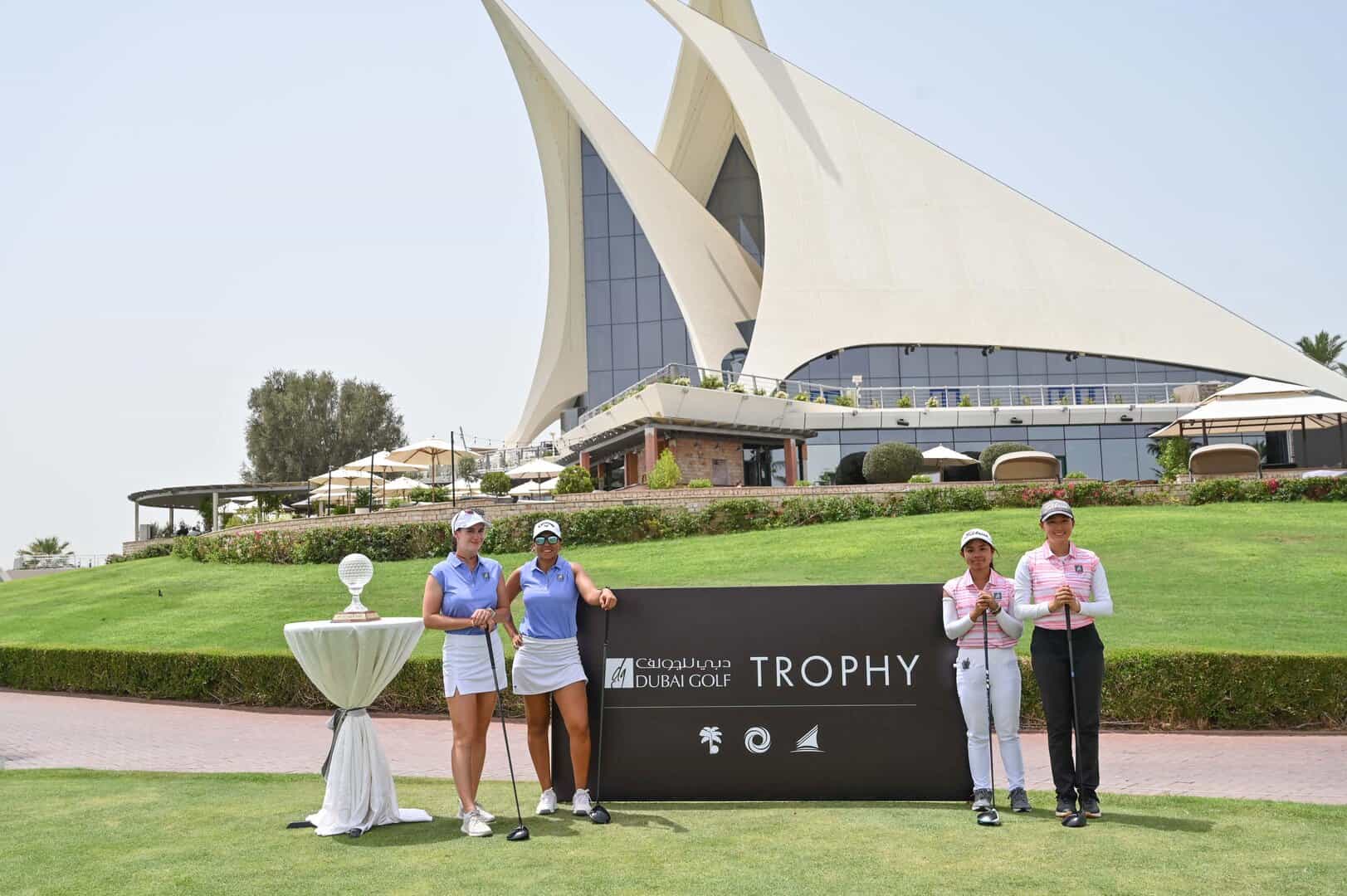 Camero on winning the Emirates Golf Federation Order of Merit

It was so special to finish in top spot on the Order of Merit, it was the first time I had achieved that. A couple of years before that I had finished as low as 12th so the progression in the last few years has been great. My rounds became a lot steadier compared to the previous years which I was pretty proud of, especially after the havoc covid caused with playing sports.

Camero on competing against her friends

The great thing about golf is that we all want to beat each other out on the course, but away from it we are really good friends. When I play with the likes of Hannah Cheryl Alan, Lara El Chaib, Liang Wei Liu and Natalii Gupta I see them as friends which helps me enjoy the game more, but we still keep that competitive spirit between us and want to win. Having them as friends motivates me more to beat them!

I was honoured to play in the Dubai Golf Trophy this year. It’s a completely different experience to playing a Ladies Open mostly because of the pressure of competing as part of a team and winning a point for your team. There’s a lot of people following you around the course and every shot matters. It was great to have the Women’s Challenge Match as part of that event, it’s a big step for women’s golf. Having said that, it’s a huge goal of mine to make the main amateur team next year. It’s going to take a lot of hard work but if I can play my game and keep steady I believe I can achieve that.

Camero on her golfing role model

My biggest role model would be Lydia Ko. I’ve seen her play terrible rounds and great rounds, but you wouldn’t be able to tell which was which as she acts the same way no matter what she is scoring. She’s able to keep that cool mojo which is a great talent and something I could definitely use in my game. I also really enjoy watching Bubba Watson, he’s a really exciting player – I’d love to watch him in person one day.

Camero on her biggest strength and weakness 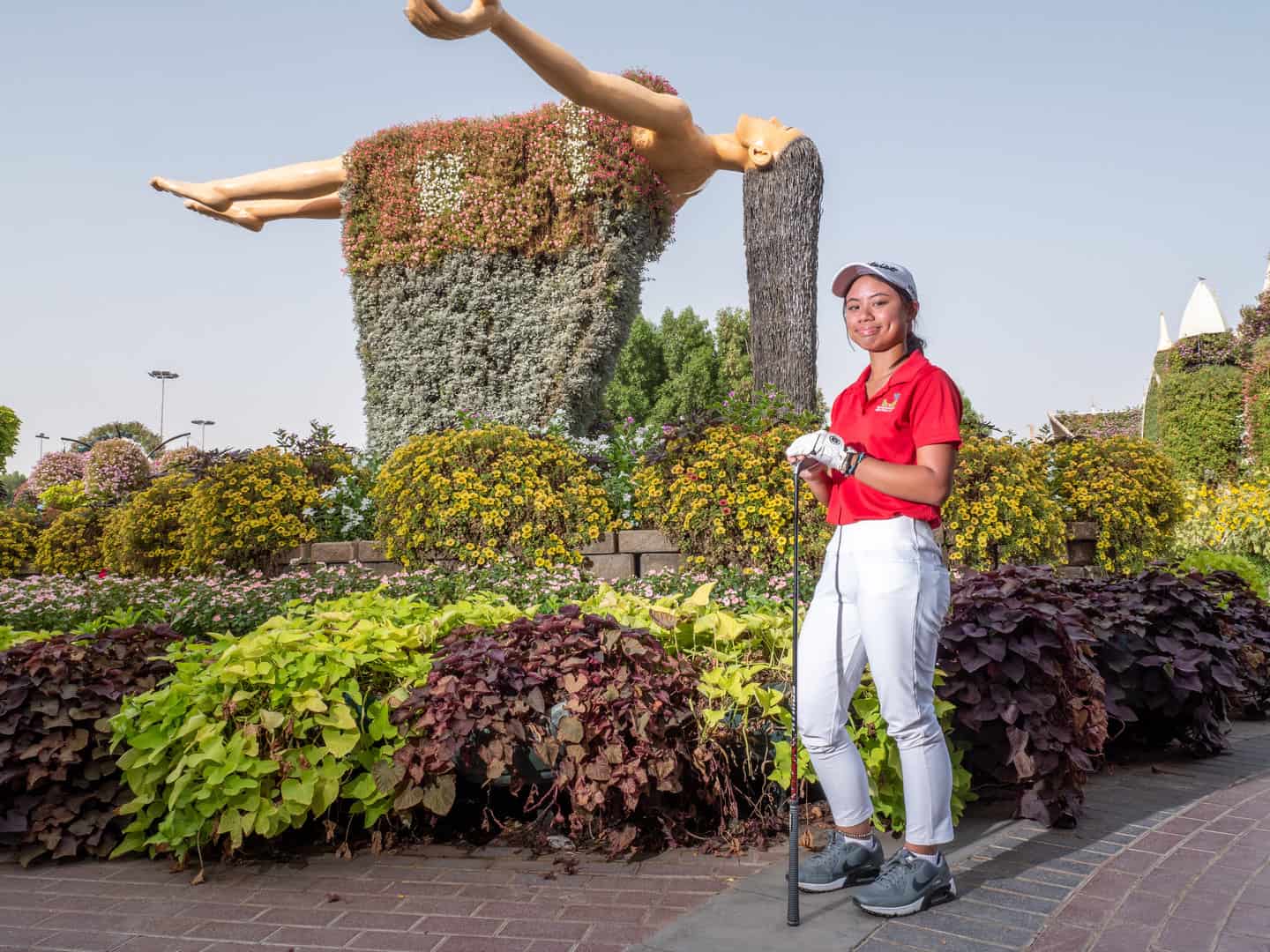 Camero on the future of her game

I’m dead set on playing college golf out in the States after I have finished my studies in the UAE. I’ve had that in mind for quite a while and I think the college golf route is an exciting one that can help me raise the level once again. Ahead of that I’m not sure, I don’t like looking too far ahead in the future.

Camero on her interests outside of golf

I like baking and watching TV shows. My specialty would be a crème brûlée, that’s my favourite and it’s quite easy to make – I also love baking cakes and cupcakes. My favourite TV show is probably the Office and I’ve just started watching Peaky Blinders.

A big thank you to Dubai Miracle Gardens for inviting us down to take photos at the worldís largest natural flower garden. The third Major of the men’s schedule gets underway this month...