Sweden’s Niclas Weiland, in his first season as a professional, made the most of his invite from the MENA Tour by Arena to win the Ras Al Khaimah Open after making an eagle on the first play-off hole against close friend and roommate Gabriel Axell on Wednesday.

At Tower Links Golf Club, the 24-year-old Weiland was solid throughout the round playing in the leadergroup for a five-under par 67, which helped him match the 17-under par 199 clubhouse lead set by Axell after a storming final-round of eight-under par 64.

England’s 20-year-old Ben Jones was the Leading Amateur at eight-under par, while Saudi Arabia’s Othman Almulla continued his fine work from last evening (three birdies in last three holes to make his first cut as a professional) to shoot the lowest round of his career – a seven-under par 65 – and finished as the highest placed MENA player at 207.

In the beginning, it looked like a romp for Henry, who was five-under par through 10 holes and leading by four shots at that point. But just like the second round, the 32-year-old Scotsman faltered on the back nine and three bogeys coming in killed his chances.

Weiland was two-under par through 12 holes, but the big swing came his way when he birdied the par-5 13th and the par-4 14th holes, while Henry parred the 13th and dropped shots on the 14th and 15th holes.

After winning the RAK Open by Arena earlier today, @NiclasWeiland spoke to us on the eventful day. pic.twitter.com/P2ManLmRW9

Axell was off to a hot start, making birdies on six of his first seven holes, before a bogey on the ninth. He then dropped another shot on the par-3 16th, but finished strong with two birdies in the final two holes.

In the play-off, Weiland hit his second shot to 20 feet on the par-5 18th, while Axell stuffed his to eight feet. But Weiland calmly rolled in his eagle putt, while Axell’s slipped past.

“It just feels amazing to be able to get the win so early in my professional career. Having studied in Florida (Barry University), I loved the weather here in the UAE the moment I landed and I just kept a very positive attitude throughout the three events I played in the MENA Tour,” said Weiland, who finished tied second in Abu Dhabi and then tied eighth in Al Ain.

“I have been playing very well and I was confident of doing well again this week. However, the way Henry played the front nine, I thought I was playing for the second prize. He was a bit unlucky on the back nine, while I kept hitting some good shots and made some putts.

“It was amazing to go up in the play-off against Gabriel. We are very good friends and we travel together. We had decided before the play-off that we will split the prize fund no matter who wins, and I am OK with that. Just that he has already started to ask me about the money transfer!” 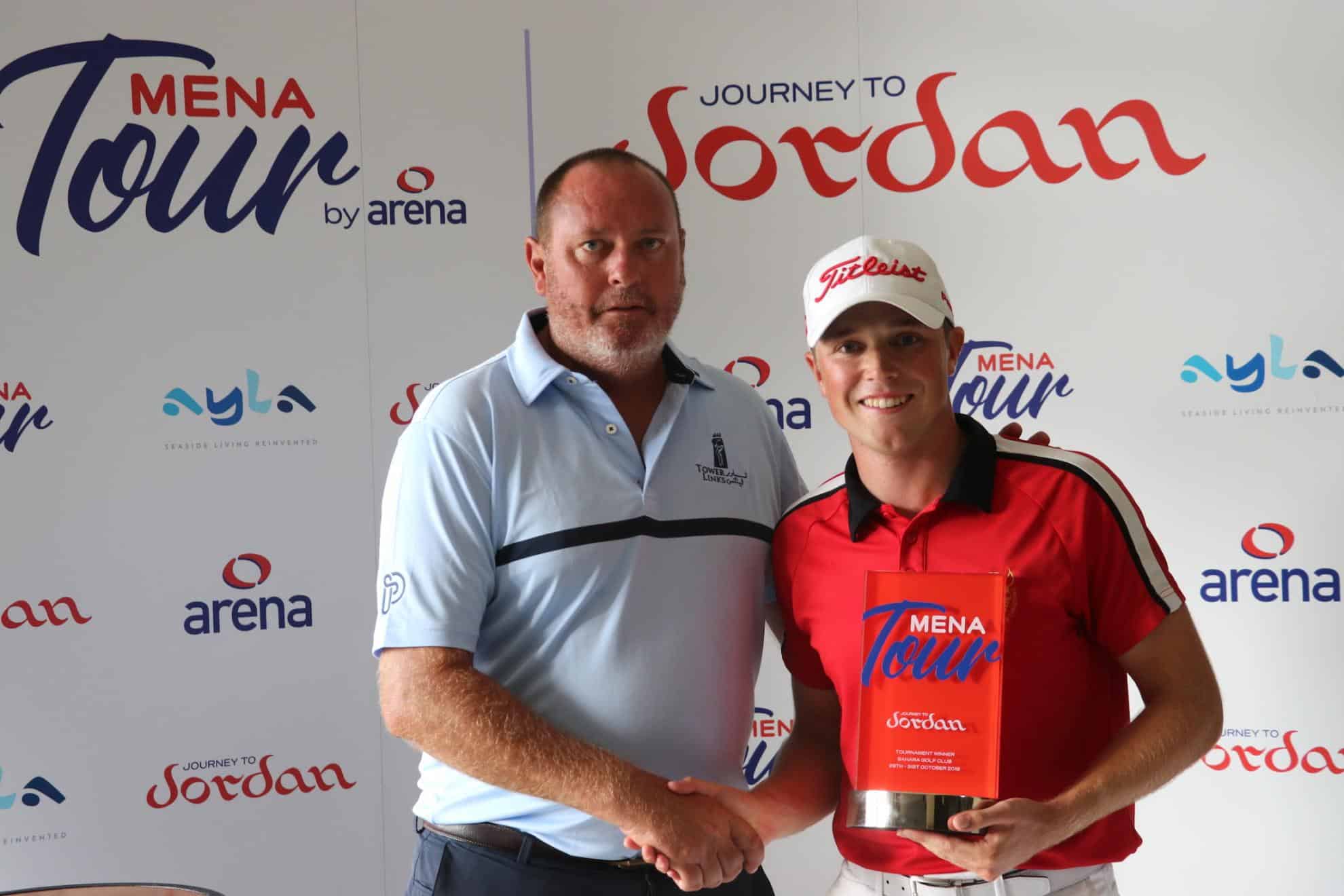 Axell, one of the most unique players in the world of golf who swings right-handed and putts left-handed, was disappointed not to win, but felt satisfied with his effort.

“I played great golf and actually thought after the two closing birdies that I would end up one short. So, to get into the playoff was a bonus. I made a birdie on the extra hole, but Niclas made an eagle, so I can’t complain,” said Axell, who had last won on the Nordic Tour four years ago and lost a tournament on the same Tour earlier this year in a play-off.

Gabriel Axell played his ‘heart out’ on the final day of the RAK Open by Arena to shoot an 8-under par 64. It was good enough to get him into a play-off, which he lost to his close friend @NiclasWeiland.

Iten, who is heading to the second stage of the European Tour Qualifying School next week, was counting the positives after finishing tied third.

“It was important that I got off to a good start, but I did not. I was one-over after 12 holes, so to make four birdies after that was good. Nothing can beat a victory, but this has been an excellent week for me ahead of the Q School and I hope to return and play a few events next year on the MENA Tour.”

The Tour now has a break before it returns for the season-ending Journey To Jordan Final, which will feature the top-60 players from the Order of Merit. The tournament will be played at Ayla Golf Club in Aqaba, Jordan, from November 25-29.

LEADING SCORES (after the final round of Ras Al Khaimah Open by Arena):

(Weiland won on the first extra hole with an eagle) Dubai Hills Golf Club by Jumeirah has been recognised by the esteemed World Golf Awards as ‘World’s Best New Golf...