One of the greatest movie quotes of all time? Happy Gilmore just had its 20th anniversary of the release date; the coincidence is that was also probably the last time you hit a good bunker shot… Read on for some simple tips on hitting consistent and pin-seeking greenside bunker shots. 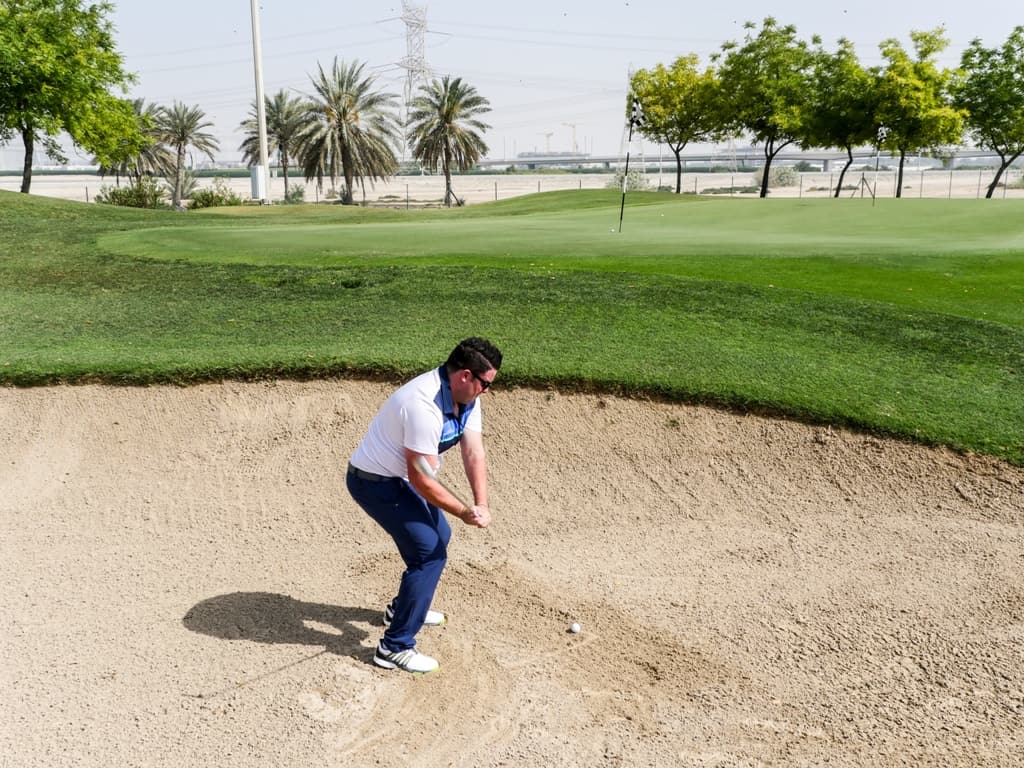 It is only fair to acknowledge that there are a few differing techniques when it comes to teaching bunker shots. The average club golfer can end up a little confused with the body angles, alignment of the feet and clubface angle combination and by the time they’ve worked that all out, their playing partners have putted out and left the green without them!

I like to teach it clearly and keep the stance in the bunker square and parallel to ball to target line. Open the face of the club slightly and then take your grip on the club (effectively gripping weak to the clubface). A simple change in your hand position by dropping the hands a couple of inches lower enables the ball flight to still come out straight even with the additional loft you’ve added to the clubhead. This is created by something called face plane tilt, but we don’t have to worry about that – let’s leave it to the manufacturers. Remember to hold your hands a little lower and flex the knees slightly more (a nice hamstring test for you!) and here you are in a fantastic set up position ready to splash the sand and slide the club underneath the ball before you can say Phil Mickelson.

Ball position should be slightly forward from centre, let’s say around 2 inches, combined with the wide stance and digging your feet into the ground, we now have a solid set-up position to enable us to take a wide swing and try to let the club shallow out to get the club sliding underneath the ball. You must make sure to take plenty of sand! A great practice tip would be to draw a line in the sand a couple of inches behind the ball.

A common fault we see as Teaching Professionals is when the player either tries to ‘scoop’ the ball out with the club shallowing out far too early. This tends to lead to either hitting way behind the ball and leaving the golf ball in the bunker or catching it thin and hitting the longest sand wedge shot you’ve ever hit as it sails past not only the green but into the nearest villa!

The second fault would be trying to create too steep an angle of attack and digging deep into the bunker. This will de-loft the club and lead to a lack of height and therefore control of the shot. Review where the club is entering the sand and best of luck with your practice. You’ll be off ‘the beach’ in no time…